So the decision has been made and we have a new Prime Minister eager to form our government for the next three years.  From what seemed to be a National certainty back in July the tables certainly changed when Jacinda took the lead for Labour.

From an investment viewpoint, such uncertainty is part and parcel of the environment we operate in.  There are a multitude of factors that we cannot have any short-term certainty over.  These include the performance of companies (and their share prices) and international relations (just look at the tensions between the US and North Korea as well as the ongoing fraught relations throughout Europe following Brexit).

The election here has introduced uncertainty over taxes, superannuation and benefit payments, house prices, employment and the general state of the economy.  Yet this week, before any government was formed, we saw the NZX50 reach its highest ever level – who would have predicted that amongst all the uncertainty?

We certainly do not presume to have the answers when it comes to what the real implication of Labour forming a government will be and how that will translate to the wealth of the country and of course, the wealth of individuals through the impact on their portfolios and the shares within.

Nevertheless, there are portfolio managers out there who believed that they did have the ability to judge what markets were going to do once the government was announced, both in the short and long term and have positioned their investments accordingly.  But can they always get it right?  They might “win” this time with a call on the government, but did they predict where milk prices were going to go this year correctly too?  Of course, they couldn’t have forecast the Kaikoura earthquake last year but when it happened, did they quickly adjust their exposure to insurance companies?

For those of you who invest with us, you will be aware of our investment philosophy which uses structured asset class investing.  This is a passive type approach to investing.  Dictionary.com defines passive as “not reacting visibly to something that might be expected to produce manifestations of an emotion or feeling“.  In investment terms that means not making changes to a sound investment strategy due to external forces which you have no control over.

Over the long term, active fund managers have been proven to NOT be able to consistently outperform benchmarks – which are the indices they are investing in – as highlighted in the following graphic: 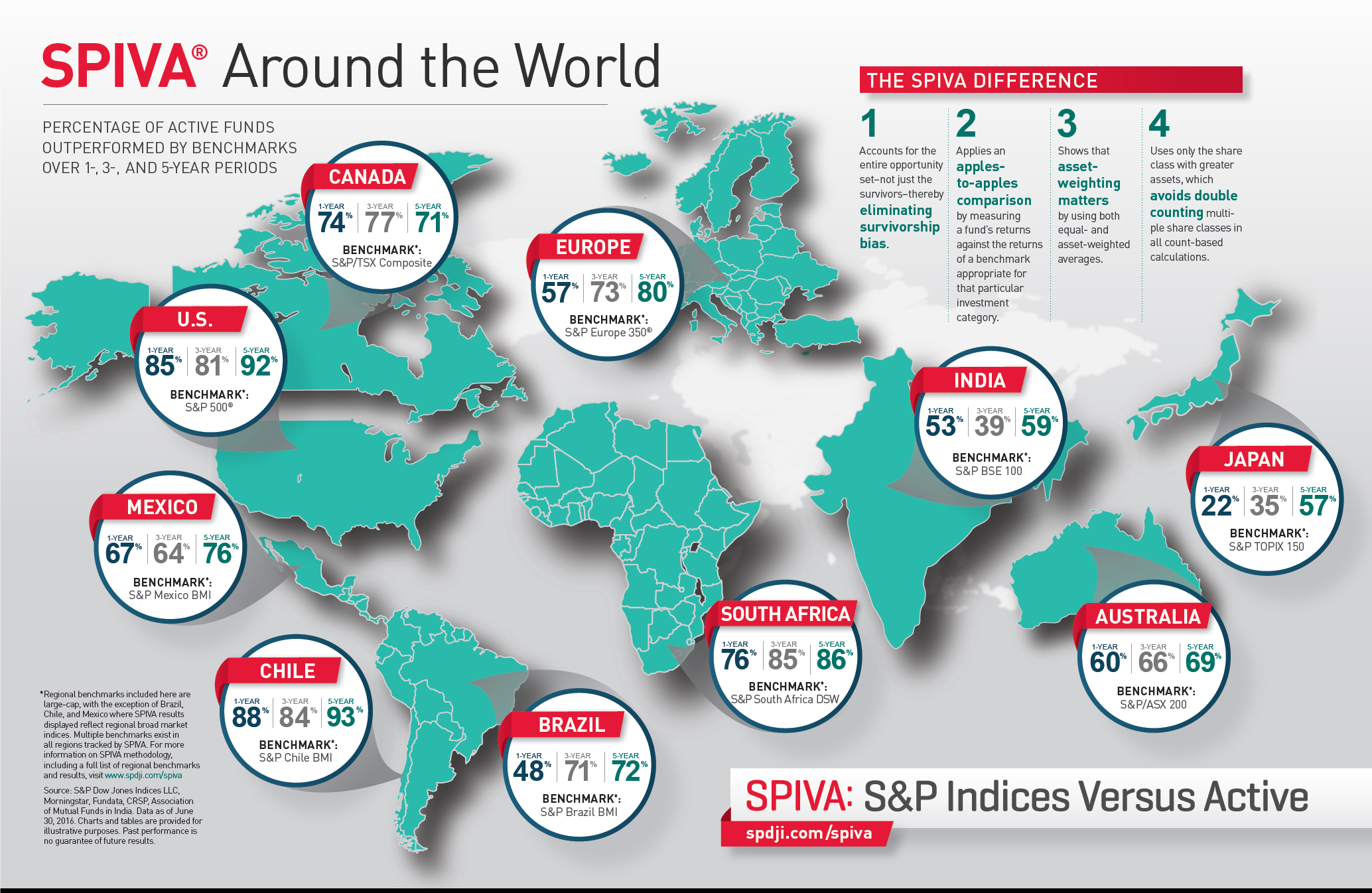 What this chart is showing when we look at Australia for example, is that over 1 year to 30th June 2016, 60% of active fund managers under-performed the ASX 200.  Over 3 years this increased to 66% and 5 years 69%.  Picking a consistently good fund manager becomes almost impossible.  You can see this replicated all around the world.  Data is coming soon for New Zealand too and we expect to see not too dissimilar results.

With a structured asset investing approach we are relying upon the engine of overall world markets to provide long term returns – something that they have already proved themselves to be good at.  It makes little sense to rely upon an active fund manager’s ability to peer into the future and second guess the possible reactions buyers and sellers might have to circumstances which haven’t yet, nor may not even ever, occur.  This is just tantamount to adding yet another, risky variable into what is already an uncertain world, and being charged for the privilege!  Their crystal balls have been found lacking the consistency needed far too often for us to gamble upon, especially when the marketplace itself provides the longer term consistency anyway.