Getting A Pass Mark 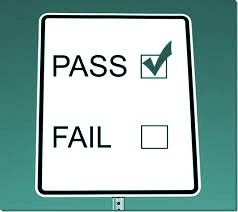 Garrison Keillor is a US author who created a fictional town for a US radio show. The town was called Lake Wobegon, and was apparently situated in Minnesota, on the edge of the prairie. It was also described as “the little town that time forgot and the decades cannot improve”, and more famously a place “where all the women are strong, all the men are good-looking, and all the children are above average.”

The mathematically inclined will appreciate the humour in the line “all the children are above average”, as it is statistically impossible for this to occur. What was supposed to be an amusing turn of phrase actually described a cognitive bias called Illusory Superiority. It is a condition where a person overestimates their skill and abilities in relation to other people’s skills and abilities. The condition also has a few other names, such as the “above-average effect”, “superiority bias”, and the “Lake Wobegon effect”.

Studies have demonstrated this effect in various studies, such as a 2000 survey of Stanford MBA students, of whom 87% considered themselves above average. Similar results can also be found when surveying driving skills. Where this cognitive bias affects investors can be seen in share traders buying and selling shares between themselves, each believing they have made a good bargain.

Some people may consider this an investment opportunity – if you can identify the correct fund manager, you can receive above market returns. Admittedly there is a risk of choosing a poor fund manager, but you can rationalise this because all investments have some level of risk attached to it.
For investors, it is not enough to simply appreciate that there is a risk – you should know what level of risk you are exposing yourself to because not all risks are equal. Take the risk of capital loss (ie your investment is worth less than you put in) as an example. This risk is always present, even with “safer” investments like term deposits. That being said, it is safer to have a term deposit with a major New Zealand bank compared to a term deposit with a minor finance company. The reason some investors choose to place deposits with finance companies is that they provide a higher interest rate compared to the safer bank deposit. Simply put, the investor has judged that the higher return from the finance company is compensating the investor for accepting a higher level of risk.

Instead of looking at individual fund managers, let’s look at the overall odds facing an active investor choosing a fund manager. Standard & Poors (S&P) reviewed the performance 860 Australian equity funds, 436 international equity funds and 116 Australian bond funds over a range of timeframes. Over longer time periods of 5, 10 and 15 years, they consistently observed underperformance in most categories.

This is not an uncommon scenario. S&P also reported on the performance of active funds around the world. Below are the percentage of active fund managers who were outperformed by their benchmarks.

If you want your investments to beat the market, choose carefully. The odds are not in your favour. The alternative is to focus on getting a market return. You may not be able to claim the best return, but beating 80% of the alternatives is a good starting point.

Technical, but necessary?
The problem with this sort of analysis is that it can seem a bit dry. What makes it relevant for investors, outside of bragging rights around the barbeque?

Investors will only get one chance at their retirement. The risk for investors is that they will not have enough income to last them in retirement. This is a common concern, and the World Economic Forum** has produced the graph below which illustrates the size of the problem of retirees outliving their retirement savings.

As a side note, you can see that Japanese retirees are expected to have the longest life expectancy past their savings. This partly reflects Japan’s longer life expectancy, but the primary driver is that the average investment is in defensive assets with low expected returns (such as cash), even for very young investors (eg 25 years old). As a result, their savings do not grow sufficiently to cover their retirement expenses. Choosing an inappropriate asset allocation can be as disadvantageous as choosing a poor active fund manager.

New Zealand is not included in this analysis, but the Financial Services Council reported*** in 2017 that “income from this accumulated wealth may run out for the majority of those aged 65+ within just 10 years after they stop work, leaving them with state pension income only for a decade or more”.

That would suggest New Zealand retirees are in a similar position to retirees worldwide.
The risk of outliving your retirement savings is real. It is complicated by uncertainty over the level of expenses you will face in retirement, and the level of income that will actually be generated to fund those expenses. Proper financial advice should consider both of these problems.