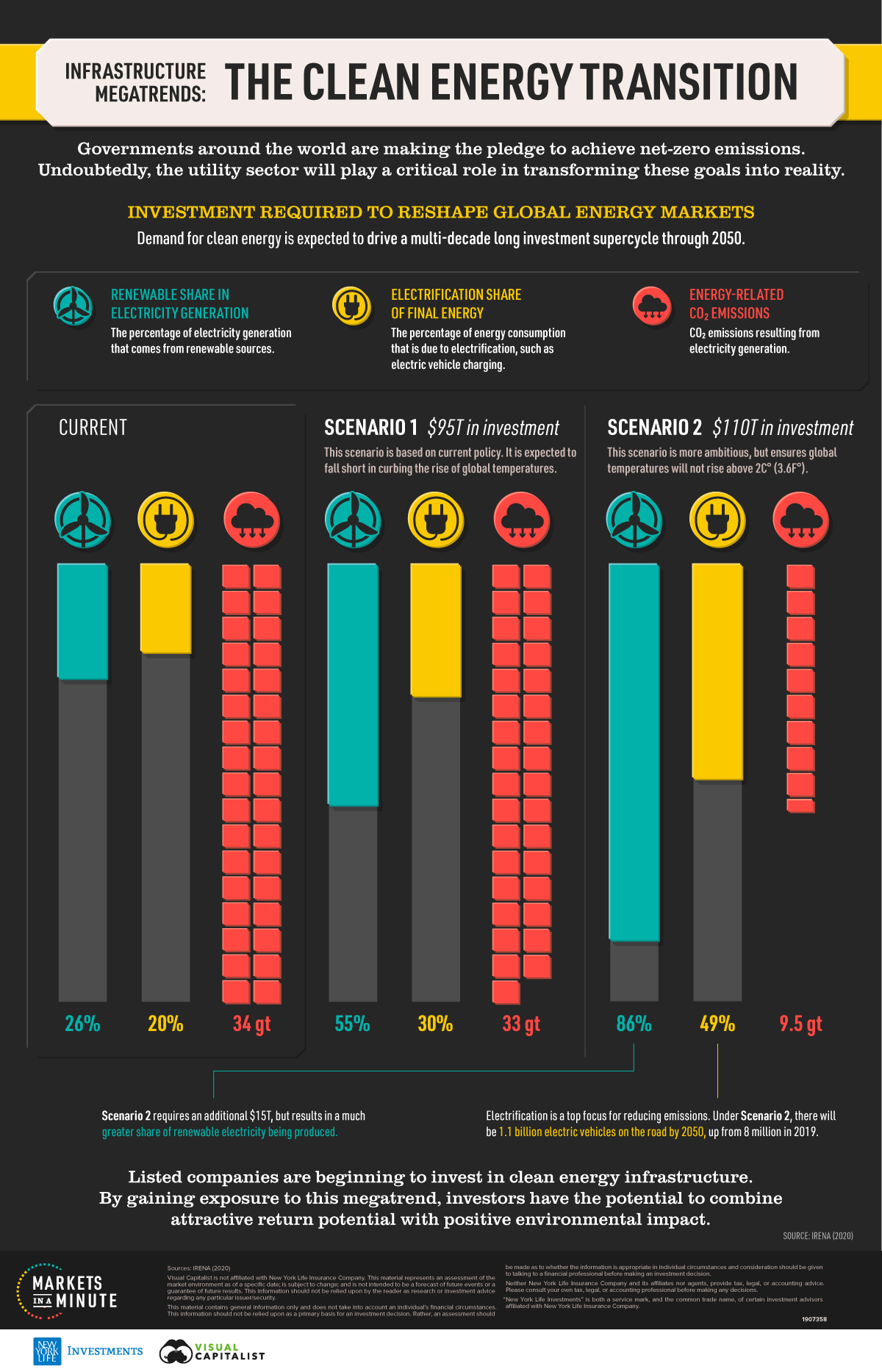 Demand for clean energy is ramping up as a majority of countries target 2050 as the year to achieve net-zero emissions. But how much will this all cost?

According to the International Renewable Energy Agency (IRENA), upwards of $100 trillion is needed to build a system capable of keeping global temperatures from rising above 2C° (3.6F°).

In the above chart from New York Life Investments and Visual Capitalist, we take a closer look at the outcomes of such a massive endeavor.

The IRENA believes there are two scenarios for how the clean energy transition plays out by 2050.

Their first scenario involves a total investment of $95 trillion (112% of global GDP in 2020) and is based on current policies and targets. Despite the lofty amount, this scenario is expected to fall short in achieving the goals set by the Paris Agreement.

Their second scenario involves a more ambitious set of targets, as well as a 16% larger investment of $110 trillion. Thanks to economies of scale, this scenario will reduce carbon emissions much further and keep the global temperature rise below 2C° (3.6F°).

The estimates behind these two scenarios are outlined in the table below.

How Do We Get There?

For scenario 2 to become reality, significant changes would need to be made across the entire economy.

For starters, the IRENA estimates that 1.1 billion electric vehicles will be on the road by 2050, up from 8 million in 2019. The resulting need for charging infrastructure is reflected by Scenario 2’s higher share of electrification (49% vs 30%).

Government subsidies around the world would also need to be adjusted, with much less money flowing to fossil fuels. The chart below provides a roadmap for these adjustments—on the left is the dollar value of subsidies, and on the right is each segment’s share of the total. Fossil fuel subsidies in the U.S. are facilitated through tax cuts, and are estimated to be worth around $20 billion per year. This may change very soon, as the Biden administration has signaled its intention to eliminate these subsidies as part of its 2021 tax plan.

The demand for clean energy is expected to kick-off a monumental transformation of the world’s infrastructure.

For investors, gaining exposure to this megatrend may combine attractive return potential with positive environmental impact. In fact, many listed companies in the utilities sector are establishing themselves as leaders in this regard.

Consider Enel, an Italian multinational with activities in Europe and the U.S. The firm has directed capital towards renewable energy since 2015 and is now the world’s largest player in renewables with 46GW of installed capacity across solar, wind, and hydro.

Further developments are planned, and Enel expects to grow its earnings (represented by EBITDA) at a compound annual growth rate (CAGR) of 5%-6% over the next decade.

To learn more about the opportunities surrounding clean energy, consider this infographic on the global sustainable recovery.