To Be More Productive, Manage Your Time Like An Athlete 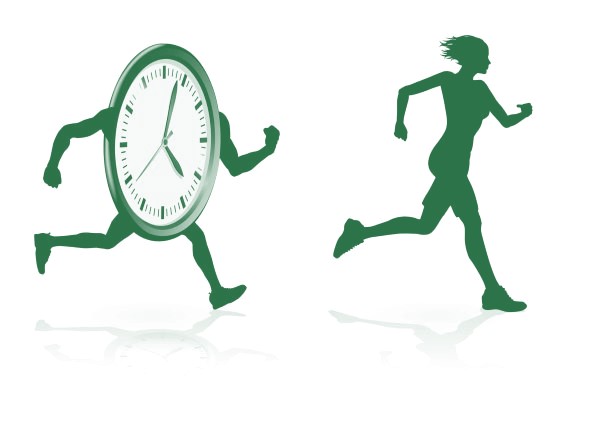 How do you focus? Carving out time for quality work has become more challenging as the technology designed to help us increasingly gets in the way.

Phone calls, emails, ever-pinging notifications are all productivity killers – and if you work from home, you can add the doorbell, family and even pets to that list.

It will take some practice, but once you’ve developed this muscle, you can repeat it over and over to really increase your output.

Brad Stulberg recommends the professional’s version of High Intensity Training to get it all done – relatively short bursts of intense work, followed by a break. Then repeating.

To get better at managing your time, borrow a training strategy from elite athletes

In the 1930s, a German coach named Woldemar Gerschler came up with a novel idea to help runners better manage their time. He discovered that they could accomplish more in a given stretch if they broke it down into discrete chunks of running, followed by brief breaks. For instance, you’ll run faster, farther, and with better form if you run hard for six sets of seven minutes, each one followed by three easy minutes, than if you run for 60 minutes consecutively. Gerschler used this style of training to guide multiple runners to Olympic medals, and it wasn’t long before it spread throughout running and eventually into just about every other sport as well. By the 1960s, Gerschler’s method — what came to be known as “interval training” — was the predominant training system across elite sports, and it still is today.

Although this idea has shaped elite sports over the last century, it’s only in the past couple decades that it’s being lifted from the playing field and applied elsewhere. This is largely thanks to the behavioral scientist K. Anders Ericsson, who, in the 1990s, began to explore what separates great performers — musicians, artists, chess players, even physicians — from everyone else. Ericsson is best known for the 10,000-hour rule, or the idea that almost anyone can become an expert in almost anything with 10,000 hours of practice — but his actual findings were somewhat different. It’s not that the best performers put in more practice time than their peers (often, they don’t). Rather, it’s how they practice: with full attention, focused on high-quality work, and in chunks of 60 to 90 minutes separated by short breaks. In other words, interval training.

Ericsson’s work focused predominantly on creative and competitive pursuits, but in researching my new book, Peak Performance: Elevate Your Game, Avoid Burnout, and Thrive With the New Science of Success, I learned there is plenty of evidence to support adopting an interval-based approach for the workday, too. For example, consider the Draugiem Group, an international social-networking company that wanted to discover what habits distinguished its most productive workers from the rest of the pack. In 2014, Draugiem partnered with the makers of DeskTime, a time-tracking app sophisticated enough to determine when employees are working and when they aren’t. After monitoring workflows throughout a typical workday, the company discovered that its all-star workers adhered to a particular routine: They spent, on average, 52 minutes engrossed in their work, took a 17-minute break, and then returned to their work.

Other companies are also beginning to follow suit, analyzing and manipulating how their employees use time. Thus far, the conclusions have all been the same: Regardless of the industry or job type, repeating cycles of intense, highly focused work followed by short breaks seem to produce the best performance. This finding has been replicated in studies examining employees in a meat-processing plant (on average, 51 minutes on followed by 9 minutes off), agricultural workers (75 minutes on followed by 15 minutes off), and computer programmers (50 minutes on followed by 7 minutes off). Across these studies, researchers agree that the reason such work cycles are so effective is the same reason why they work in sports: Intervals stave off both physical and mental fatigue, allowing people to work better for longer over the course of a day.

Nearly all of the world-class performers I met in reporting on Peak Performance — ranging from internationally acclaimed sculptor Emil Alzamora to Taylor Swift drummer Matt Billingslea to Olympic cyclist Megan Gaurnier to renowned venture capitalist Bob Kocher — told me that they, too, work in discrete chunks followed by brief recovery periods. They also said that eliminating distractions and single-tasking during such chunks is paramount to their productivity — and for good reason. Although most people love multitasking because it makes them feel like they’re getting more out of their time, it turns out that the opposite is true.

Studies using fMRI technology to view brain activity have found that it’s impossible to do two things at once, even in individuals who claim to be exceptional multitaskers. What’s really happening is that your brain is either dividing and conquering, dedicated only half of its available horsepower to each task, or constantly switching between tasks. Either way, your output level suffers, as does the quality of your work.

In a summary of the recent research on multitasking, the American Psychological Association wrote that seemingly effective multitasking can cannibalize as much as 40 percent of someone’s productive time. To put it another way: You may feel like you’re getting twice as much done when you multitask, but you’re actually only getting close to half as much done. Of course, when you step back from the world of constant stimuli that so many of us inhabit, this makes tons of sense. A runner would never stop in the middle of a sprint to check her phone — doing so would ruin the quality of the interval.

Regardless of the task at hand, it seems that highly focused, single-task intervals allow you to exert and sustain the physical, cognitive, and emotional energy required to get the most out of what you’re doing. This ebb and flow — time on, time off — runs counter to the most common strategies we adopt to get through the workday: either perpetually working in an “in-between zone” of moderately hard work rife with multitasking, or working at the utmost intensity nonstop. Neither of these more traditional approaches is ideal. The former leads to underperformance, the latter to burnout. A far better way to manage — and get the most out of — your time is to take a decades-old lesson from athletics and work in intervals, alternating between blocks of hard, deep-focus work and brief periods of rest.